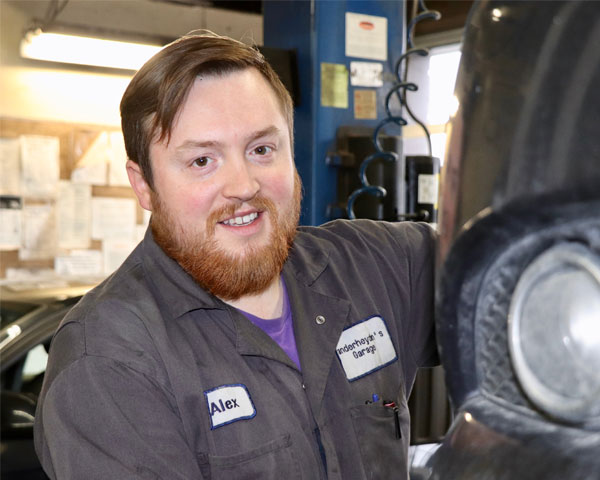 I knew at a young age that I was mechanically inclined. I would build things with my dad, I was obsessed with Lego and worked with my grandfather on his farm fixing equipment. When I was 13, I bought a snow blower, would snow blow driveways for money and learned how to maintain it. In the summers, I would use the family mower, mowing neighbours’ lawns and maintained the mower for my parents. I helped my dad change an engine in our family car when I was 15 and really enjoyed it. This pushed me towards a career in automotive repair.

In grade 10, I did a semester co-op placement with the automotive shop around the corner from my house, where my parents went to fix their car. I quickly enjoyed the day to day work and my boss became one of my main mentors. He gave me the base to the quality and care of my work. He would tell me to treat cars like they were my own and that has stayed with me ever since. After the co-op placement was over, I was hired to work after school and full-time in the summer, and continued to work for him until the end of high school. The skills and lessons I learned during that time really molded me into the technician I am today.

After high school, our family moved around Canada and I did different automotive jobs along the way. Then my parents were posted to Halifax and I enrolled in the Automotive Service Technician apprenticeship program at NSCC and started my career. I worked at a couple small shops in Halifax and decided to apply at BMW. I was accepted and started at the Halifax BMW dealership. I also volunteered on a race team and would fix cars at Atlantic Motorsport Park. I graduated top of my class and received the Eric Davidson Award. I challenged the Automotive Technician Red Seal Exam as soon as possible and received my Red Seal License. I also completed the first levels of training at BMW University while at Halifax BMW.

I met my wife while in Halifax and when my parents were posted to Alberta, we decided to move to Durham Region in Ontario to be close to her family. I transferred to Endras BMW in Ajax, where I worked for 5 years. I worked hard at BMW University and completed 3 out of 4 levels and passed the Certified Level Technician test which was a huge accomplishment. I worked for BMW in total for close to 10 years, but decided that I wanted to make a change for personal and family reasons.

I was given an opportunity to come to Vanderheyden’s Garage and had a discussion with Wim about a possible new direction. I felt the family-run business feeling immediately, basing it from my past experiences when I first got into automotive. Also, Vanderheyden’s specializes in import vehicles, including a large amount of BMW’s and thought it would be a smart move for me considering my experience with BMW. At the same time, it also brought me back to my roots of working on multiple brands. I have worked at Vanderheyden’s Garage for over a year now and enjoy it. Wim has been one of the most caring and appreciative bosses I’ve had. I hear it from customers every day on how much they love coming, knowing they can trust the garage to be fair and honest.